In metal component manufacturing, soft magnetic iron's performance is affected by post-pressing processing and your part’s density. It’s that second fact engineers and developers seem to forget when requesting a ferromagnetic component.

The unique properties of soft magnetic iron can build a stronger, more magnetic AC or DC electromagnetic design. Here are some charts and other helpful information about permeability and saturation to help you leverage density in your next project:

Magnetic performance is a function of the:

Density has a surprising influence on saturation induction and high-magnetic-permeability materials. 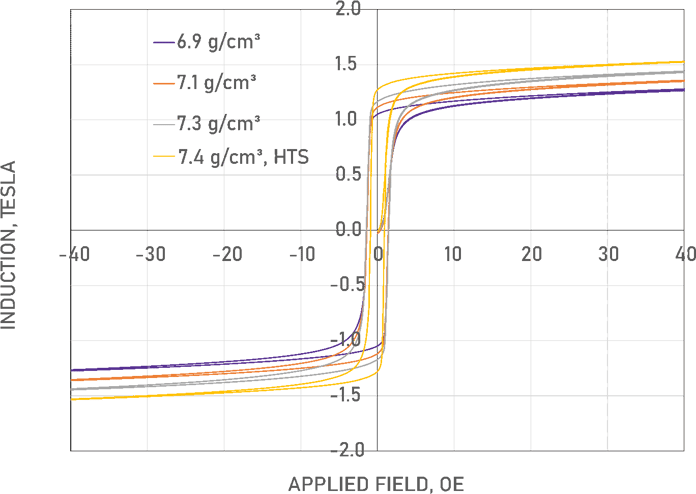 Above is a BH curve representation of the same sintered soft magnetic material, manufactured to four different densities. The final one -- the yellow line -- was high-temperature-sintered. As you increase density, you also increase the ability to capture magnetic flux leaks.

For conventional wrought steel, this Bsat value is assumed to be 21,500 G or 2.15 T.  However, in PM soft magnetic materials, you also have the added variable of part density. The magnetic saturation for powder metal materials depends on the density of the component, expressed as:

The saturation flux density (Bsat) value essentially measures the max amount of magnetic flux that can be stored in your iron.

Although the above chart shows sintered materials, a similar trend can also be observed with non-sintered SMCs.

Permeability is still density-dependent, but is also a function how your parts are processed. In the absence of sintering (it makes SMC parts too brittle), advanced powder metallurgy manufacturers use other heat treatments to customize density in SMC grades. We'll just focus on one material grade in the BH curve below, but again show it at three densities. See the changes in permeability response in relation to density? 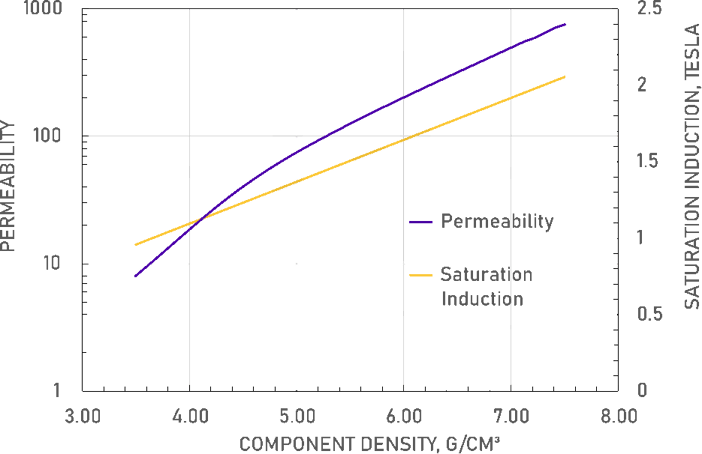 Higher density will give you higher performance levels. This graphics shows how quickly your component can store energy with the applied current.

As you approach these different densities with SMCs, you'll need to be careful with your design and tooling.

As already noted, SMC materials aren't famous for their great permeability, though neither are competing electrical steel laminations once you stack them up. SMCs are noted for possessing high resistivity.

The permeability curve on this chart is merely an estimate. Other processing details can change this property. However, saturation induction will generally stick to what you see above.

As you move forward on that chart density-wise, you'll potentially encounter higher cost. This applies to both sintered and SMC parts to a certain extent.

So, What's This Mean to Magnetic Component Engineering?

To put all this in more simple terms? There’s a linear relationship between maximum magnetic induction and your part’s density.

A smaller density number might tell a designer, “Wait ... I have to increase the wall thickness of this part.” But if you have a higher density, that designer might realize, “OK, this material fits in more nicely with my design.”

Note that your material has the same Bsat level whether its sintered or a soft magnetic composite. Maximum magnetic induction depends solely on the iron’s density. How much current it takes to get there will be different based on the process.

Uses for SSMs in High-Magnetic-Permeability Materials

Uses for SMCs in High-Saturation Parts

Soft magnetic composites compacted to high density are viable in:

How Else Can You Leverage Soft Magnetic Materials?

Density is hugely important to the magnetic performance of your product. Powder metal parts made from iron-based sintered or non-sintered materials can help achieve ideal magnetic properties.

Not all companies and engineers fully understand the capabilities of soft magnetics yet, so your head may be spinning from all these numbers and equations. If you need help understanding how specialized material processing can improve your electric design, see our Resource Hub:

(Editor's note: This article was originally published in June 2018 and was recently updated.)