Have you ever wished you had superpowers that could stop both hysteresis and eddy current loss in a project that demanded high magnetic performance?

Core loss in magnetic material is a measure of the heat generated within the material as a result of the alternating current. High core losses result in poor electric motor thermal efficiency.

An inefficient magnetic part can drag down an entire AC electric motor design. A little lesson about materials can show you how to minimize core and hysteresis losses in induction motors and other AC electromagnetic designs ...

Total core loss is actually the combination of two types of loss. Here's the difference between hysteresis loss and eddy current loss:

Both increase the heat level in a magnetic material. Electric motors + Heat = Electric motor inefficiency. (We’ll provide a much longer, more usable equation in a bit.)

Eddy current loss occurs in all AC electromagnetic devices, including:

Stator core loss is a common complaint of AC induction electric motor designers, but one you can address more easily than you think ...

Let’s get more specific. Core losses in soft magnetic composite materials depend on the: 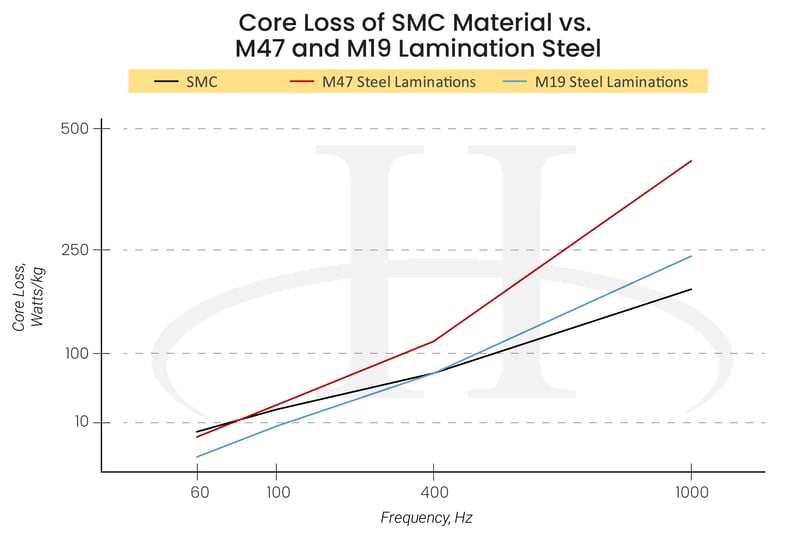 (Measured at an induction level of 1.5 Tesla.)

The SMC charted above is a Somaloy 700 5P, a high-performance powder metallurgy material.

The chart clearly shows that soft magnetic composite is best at higher frequencies. It’s also apparent that SMCs are superior to M47 laminate at frequencies above 400 Hz.

This core loss data assumes the SMCs were compacted to a density of 7.5 g/cm³. The data for the laminations was based on the core loss at 60 Hz for each of the two materials, then extrapolated using this core loss formula:

And here's the hysteresis loss and eddy current losses formula for the SMC material:

In the hands of your smartest engineer (maybe that’s you), this equation can calculate your core losses at any level of:

In other words, you can learn how much heat (aka total core loss) you’ll generate using a soft magnetic composite at densities below 7.5 g/cm³ under any specific condition. Remember that higher resistivity generates less heat.

What About Core Loss in Lamination Assemblies? 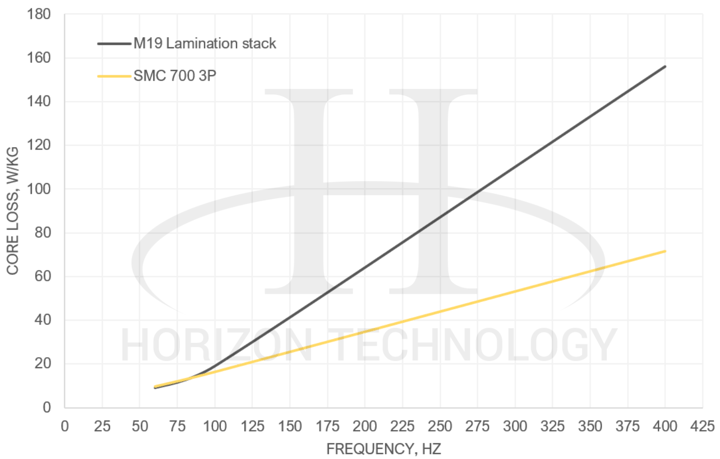 Most published data evaluates only a single sheet when discussing core losses in lamination steel.

But what happens when you stack them? In the example above, laminations start to falter at as low as 60 Hz compared with Somaloy 700 3P, a popular SMC material.

(Open the chart in a new tab to expand it for readability.)

Size matters even less when it comes to soft magnetic composite assemblies.

However, the same table shows that the magnetic performance of SMC isn’t affected by the compacted height of the component. That means SMCs' permeability and core losses stay about the same, while those of laminations take a sharp turn for the worse as assembly size increases.

The SMC 700 5P from the very first chart represents the optimal soft magnetic composite. As we've alluded to, there are variations of this state-of-the-art material available to cater to your performance and budgetary needs.

This table gives the values for each of the three major grades of soft magnetic composite: 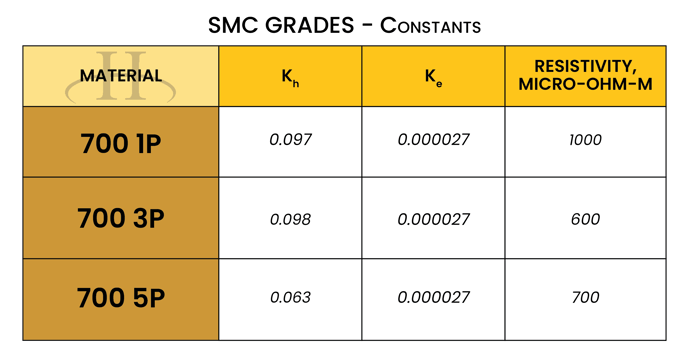 How to Minimize Hysteresis Loss

Whether you're deciding how to reduce core and hysteresis losses in a transformer, a vehicle's motor, or something else, SMC is attractive for modern, high-frequency applications.

However, they are not historically ideal for induction motors used in fridges, air conditioners, etc.

That said, if you can reduce the operating cost of the product, you can spend more money on optimizing your motor. You’ll eventually save the extra money you put in on the front end.

Some pretty smart people are starting to use this concept. We hope you capitalize on the potential of soft magnetic composite, too.

(Editor's note: This article was originally published in September 2018 and was recently updated.)