Modern e-powertrain and drivetrain designs are no longer a nice idea. In some parts of the world, they’re a must.

Manufacturers and developers must commit to further optimizing drive units, tweaking everything from torque and power density to efficiency, weight, and -- above all -- production costs.

Torque is perhaps the most interesting of those market factors. Torque is a catchy buzzword in Ford commercials, but what does it all mean?

For starters, torque is a twisting force engineers use to create rotation. There’s a fork in the road coming in powertrain development, as producers consider the pros and cons of electric vs. traditional drive units.

Torque in internal combustion engines has a useful RPM range of 2,000 to about 5,000.

One early method of creating higher torque was making a larger displacement engine. More recently, the use of turbochargers and superchargers have increased the air volume in the cylinder, creating more downward force of the piston -- and more torque. 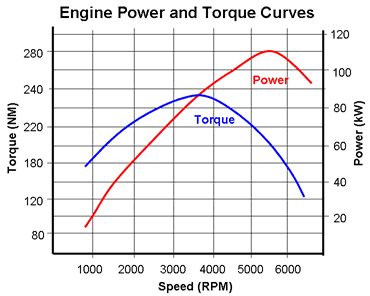 A typical torque and power curve for an IC engine is above. For this particular engine, torque is higher than power up to about 4,000 RPM. Thus, torque is the dominant motive force for engines in most normal driving situations. This is why most engines are designed to operate at 2,000 to 4,000 RPM for optimal performance.

That’s also why a driver is losing efficiency when he slams on the gas. He’s dumping excess fuel into the cylinders, which spools the engine faster, but it’s not being used to generate energy. The driver ends up with a lot more unburned hydrocarbons, and the percentage of gas going out the tailpipe increases -- again, all that extra gas isn’t being efficiently converted to torque.

This isn’t a big deal on the open roads of Kansas. But when your customer is driving in start-stop Boston traffic, the ability to quickly accelerate is still key.

The old saying was, “You drive torque to 100 mph, but drive horsepower above 100 mph.” Those numbers probably aren’t exactly on-target, but the trend is still the same. Take a look at the tachometer on your car sometime while cruising the highway at 70 mph -- your engine is probably running right around 2,000 RPM.

Electric Motor Torque Vs. Diesel (and a Shoutout to Hybrids) 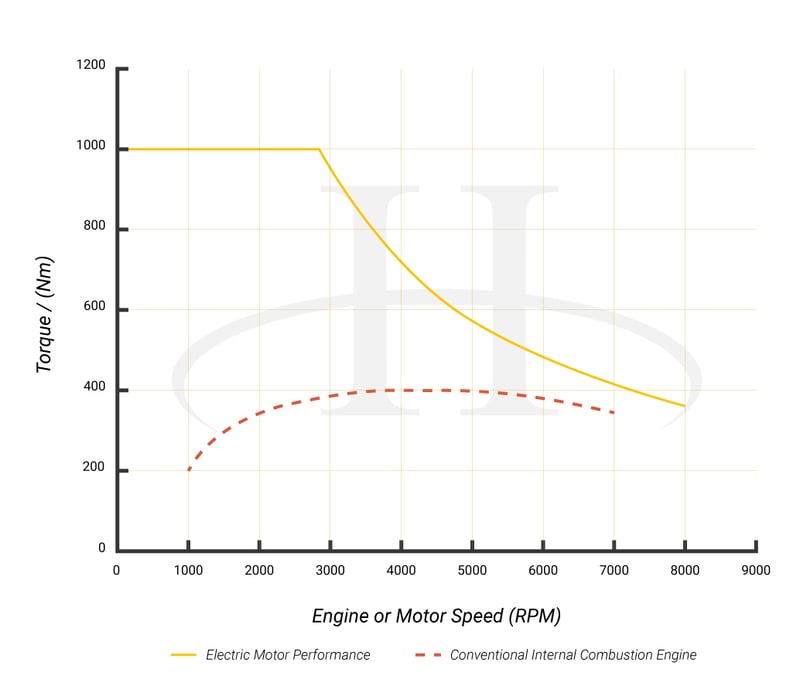 In this chart, the torque generated by the electric motor is instantly at its max value. What this means is the electric car can and usually will have faster acceleration.

Remember, electric motors don’t need to spool up to get max torque. Instead, they deliver max torque immediately upon activation.

Similarly, diesel engines boast a higher torque than their IC competitors because of the greater compression ratio and twist that happens within a diesel powertrain. As far as electric motor torque vs. diesel torque goes, that’s a race still won by electric.

Let’s not forget about hybrid car designs! Recently, high-end sports cars have included both electric and IC motors within the same unit. They use electricity for the initial start-up because of its superior torque, then rely on the IC engine at higher speeds.

Other Factors in Automotive Powertrain Design

Of course, automotive drivetrain design considerations aren’t contained to just torque talk. What about the other factors that influence the reputation of different engine types?

Noise levels in electric vehicles are much lower than during the industry’s first baby steps. There’s a reason the Toyota Prius is called an “assassin’s car” in pop culture.

Listen to a diesel engine vs. an electric motor, and the improvement literally speaks for itself.

We know air quality has only improved as engines have moved from fossil fuels to electric.

A 2019 study by Northwestern University quantified the differences in pollution generated by battery-powered electric vehicles vs. IC engines. The researchers found that even when electricity is created from combustion sources, electric has a net positive impact on air quality and, yes, climate change.

Cost has been one of the biggest inhibitors to the full adoption of electric vehicle drivetrain design. The up-front cost can be quite high, but operating costs and maintenance costs of full electrics are quite low.

That cost factor is a constantly changing picture, and one that continues to tilt in the favor of electric vehicles. In April 2019, BloombergNEF forecasted that the point at which electric vehicles will become cheaper than their IC engine equivalents is 2022 for large vehicles in the European Union. You can thank the continued shrinkage -- both physically and in cost -- of the electric battery.

The efficiency of a gas engine vs. an electric motor is no contest anymore – electric wins. But not everyone can afford the better option -- yet -- nor do they necessarily want to deviate from the comfortable and familiar. So, how do we get electric vehicles to further push past that cost threshold and become the popular choice?

One “strategy” is to sit back and watch IC engines suffer. The Bloomberg report notes that chassis and body costs will likely rise for internal combustion engines in the future as producers struggle to meet emissions standards.

Powder metallurgy can be another factor in this paradigm shift, as it can reduce costs in electric vehicle drivetrain. Advanced powder metallurgy companies are offering more competitive parts to market thanks to new processes and materials.

In certain regions of the world, EVs are soon going to dominate vehicle production. It’s probably a bit farther into the future in the United States because of longer distances between cities and the current lack of crucial infrastructure.

What does this mean for powder metallurgy?

PM will need to adapt to these new automotive market directions and have technology ready to meet these new challenges. Advances such as ultra-high-temperature sintering can adapt to the challenges of smaller, more highly stressed powder metal parts. Meanwhile, soft magnetic composites and advanced sintered soft magnetic materials can find applications in both drive systems and the growing list of electric motors within the automobile.

Now you can create new powder metal designs with both structural and magnetic materials, the latter of which you can learn more about via the free download below. The powder metallurgy industry has tons to offer the powertrain and automotive industry as a whole as the world continues to “go electric.”